FINE I AM GONNA WRITE A POST [updated with photos] 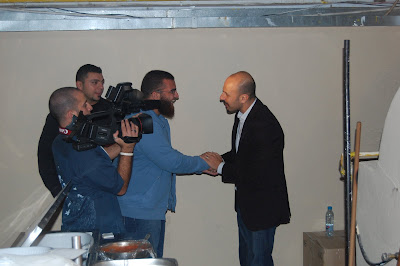 This is when minister of foreign affairs Khalid Jarrar and minister of comedy and media Maz Jobrani met... 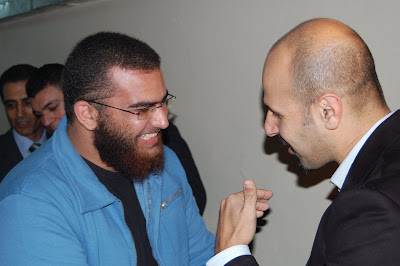 A photo of the ministers discussing issues involving world peace... 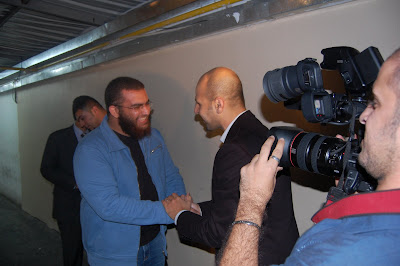 A photo of the camera man, with the ministers in the background holding hands (:O what a scandal)... 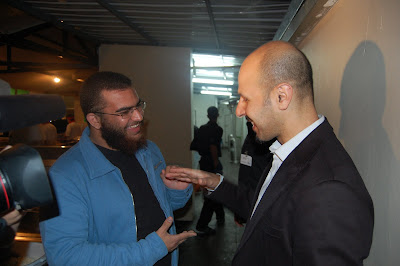 And the meeting was over, like all other officials meetings, with a lot of recomendations and decisions that will never be implemented:P

Dear God i am happy i am not married to any of you, nagging commentors and email senders i would have killed myself long time ago.

So i have been away for a while. You would think that i was busy. But i wasn't really, at all. You would think i was depressed over the continuity of the situation in Iraq. But no, not really. I got used to that. Another common reason for not blogging is that a blogger simply doesn't feel like it. But actually that's not that case either, I want to blog! but the problem is that i can't seem to make myself do it, for some reason. I think that after all the time since the war, i started to believe that talking about it is not gonna solve it, working on it can help though!

I sort of started to see that working on solving the humanitarian problems and needs of Iraqi refugees is the smallest of things that can be done, on a personal level. And can actually make a difference, you can go sleep knowing that you helped a family, ten families or a hundred families sleep better that you provided them with blankets in this harsh winter, or have a sense of satisfaction knowing that you helped families start their own micro project to have an income source to support themselves. It's something, i am telling you. I feel that by helping in that filed, i can actually do something on the ground while doing the talking part online, Don't get me wrong, the talking part is important to support the Iraqi cause, it is, but as a friend put it: you have to put your money where you put your words. I think that saying of hers, should be written with gold water and hanged all over the world. Imagine if everyone put their money where they put their words? what a lovely world would it be!

Hence, we have been sending emails left and right, to friends and family, extended family, bloggers, online friends and whatnot. Practically everyone we could reach, to convince them to donate whatever they have, to fund our projects of supporting Iraqi refugees in both Syria and Jordan, and build micro projects for them [visit the site, it has photos and details about the projects, and also you can donate online wherever you are], or through just buying them basic life needs and sometimes pay their rent or cover such needs, since they live in Jordan illegally and therefor are not allowed to work, just to add to their miserable situation.

I have all faith that people that read Tell Me a Secret have genuine concern about Iraqi people, and then i ask you to visit the link provided above, which leads you to the Collateral Repair Project where you can learn about it, and also demonstrate your generosity, or the lack of there is :P

On more personal news, i still have a month or so before i graduate [OK, i myself can't believe it until it happens, i have been delayed over 2 years because i left Iraq and came to continue in Jordan] so pray for me that i do graduate this January, please.

Not much have been going on, today is the second day of the Adha Eid, the longest holiday in the Muslim calender, and you usually spend the Eid visiting relatives and friends, dressing well, and eating chocolates and cookies in every house you visit, and coffee too, these are the traditions, and also you typically give children money in Eid, so it's all about joy, and it lasts for 4 days, meanwhile pilgrimages in Mecca finish the rituals of Haj, and should be going back to their families soon, wherever they are, to find celebrations of welcoming back and receive visits from all loved ones congratulating them for preforming the Haj, asking God to accept their Haj and good deeds.

I have had the pleasure of meeting two Iraqi bloggers lately, Chikitia and Miraj, who happened to be in Amman for a little while, it was great pleasure to get to meet them.

Also, i got to meet a very nice guy, Maz Jobrani, he and The Axis of Evil Comedy Tour were in town [They are amazing you gotta watch their show if they are ever in your town] and i bought their tickets long before the show time, but then next day the company organizing the event called and asked me to return the ticket or buy another one because the event is for couples only, i was so sad about that and had to return it, i wrote a heart-tearing whining and wailing email to Maz Jobrani, their most famous team member, and i explained the situation to him, he replied very quickly and promised to let the organizers look into it, next thing i know i got a phone call from the organizers, Showtime Network, apologizing for the mistake and offering me two free tickets [knowing that each was sold for about $65] I was happy about it, i went to the show with other friends, ones that were lucky to get their tickets already, a Jordanian blogger with his sister, and another friend with her fiance. Anyways! not only did i get free tickets, but they also took me to the backstage where i met Maz Jobrani, they filmed the minutes we spent together where we talked about the importance of their work in breaking stereotypes about middle east people. And that little meeting with Maz has a good chance to end up in the film of their tour in the ME [buy it and see me;) totally worth it!], and then we all watched the show and laughed until our cheeks hurt and went back home after midnight, it was a lovely evening, i don't remember having so much fun since i left Baghdad.

Majed is here for the Eid, so that's a very nice thing too, we haven't seen in him in months. Maybe Raed will visit later with Niki, the Jarrars rarely ever, ever get together in real life anymore, so that's a big thing to gather them under one non-virtual roof for a while:)

My cat got sick and died:( i know:( no vets could do anything, but it's alright i am sure she is in cats heavens now. so it's ok. And i got a new little kitten, his name is Tigger / tigar /. And he is so cute, aren't all kittens?:)

I bought an ipod :D does that mean i am accepting American liberation or something?:P
don't even dream about it, i just appreciate good technology **grin**

I will publish the photos of me and Maz once he emails them to me inshalla [you promised Maz!][Update, as you can see above he did! yay:D] and since this post broke my wall of silence, i hope that other posts will follow soon..

Take good care of yourself everyone, it's been lovely to meet you all again!