Killing of 30 people in Gaza when army shelled house full of evacuees 'has all hallmarks of war crime', says high commissioner for human rights 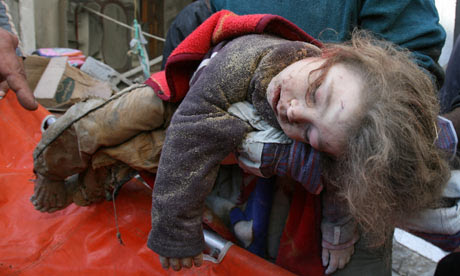 The body of a girl who was found in the rubble of her destroyed house following an Israeli air strike on a house in Zeitoun Photograph: Mohammed Abed/AFP/Getty Images

The Israeli military may have committed war crimes in Gaza, the UN's most senior human rights official said tonight, as Israeli troops pressed on with their increasingly deadly offensive in defiance of a UN security council resolution demanding a ceasefire.

Navi Pillay, the UN high commissioner for human rights, singled out the killing this week of up to 30 Palestinians in Zeitoun, south-east of Gaza City, when Israel shelled a house where its troops had told about 110 civilians to take shelter.

Pillay, a former international criminal court judge from South Africa, told the BBC the incident "appears to have all the elements of war crimes". She called for "credible, independent and transparent" investigations into possible violations of humanitarian law.

The accusation came as Israel kept up its two-week-old air and ground offensive in Gaza and dismissed as "unworkable" the UN security council resolution calling for "an immediate, durable and fully respected ceasefire". Protests against the offensive were held across the world today as diplomacy to halt the conflict appeared to falter.

With the Palestinian casualty toll rising to around 780 dead and more than 3,100 injured, fresh evidence emerged today of the Zeitoun killings.

The UN Office for the Coordination of Humanitarian Affairs (OCHA), said in a report it was "one of the gravest incidents since the beginning of operations" against Hamas militants in Gaza by the Israeli military on 27 December.

OCHA said the incident took place on 4 January, a day after Israel began its ground offensive in Gaza. According to testimonies gathered by the UN, Israeli soldiers evacuated about 110 Palestinians to a single-storey house in Zeitoun. The evacuees were instructed to stay indoors for their safety but 24 hours later the Israeli army shelled the house. About half the Palestinians sheltering in the house were children, OCHA said. The report also complains that the Israeli Defence Force prevented medical teams from entering the area to evacuate the wounded.

The OCHA report does not accuse Israel of a deliberate act but calls for an investigation. Responding to the report, an Israeli military spokeswoman, Avital Leibovich, told AFP news agency: "From initial checking, we don't have knowledge of this incident. We started an inquiry but we still don't know about it."

Among the dead were nine members of the Samouni family; a picture of three of the family's children in blood-stained clothing laid on a morgue floor and in front of their grieving father was shown in the Guardian on Tuesday. The father, Wael Samouni, said dozens of people had been sheltering in the house after Israeli troops ordered them and neighbours to stay inside.

"Those who survived, and were able, walked two kilometres to Salah Ed Din road before being transported to the hospital in civilian vehicles," the UN said.

Rescuers from the International Committee of the Red Cross (ICRC) and the Palestinian Red Crescent Society said they were able to reach the area on Wednesday only after being allowed safe passage by Israel.

The ICRC issued a statement on the incident yesterday, accusing the Israeli military of "unacceptable" delays in allowing medics safe access to injured Gazans.

More than 40 Palestinians were killed in another incident on Tuesday after missiles exploded outside a UN school that had been sheltering hundreds of people in the Jabaliya refugee camp, despite the UN saying the school was clearly marked with a UN flag and its position reported to Israeli military.

More than 750 Palestinians have died since the start of the Israeli military operation. More than half of Gaza's population are children, and the Palestinian ministry of health said about 42% of the casualties have been children.

Unicef said at least 100 children and minors were killed in the first 10 days of fighting. The Palestinian Centre for Human Rights, which posts staff at hospitals to track casualties, put this number at more than 160.

Abdel-Rahman Ghandour, the Jordan-based spokesman for Unicef in the Middle East and North Africa, said: "We are talking about urban war. The density of the population is so high, it's bound to hurt children … This is a unique conflict, where there is nowhere to go."

Israel has accused Hamas of using civilians as human shields and has said militants have fired rockets from rooftops of homes and mosques.

Mark Regev, an Israeli government spokesman, said: "Israel wants to see no harm to the children of Gaza. On the contrary, we would like to see their children and our children grow up without the fear of violence. Until now, Hamas has deliberately prevented that from becoming reality."

Fighting in Gaza has continued despite yesterday's UN security council resolution calling for an "immediate" and "durable" ceasefire and the full withdrawal of Israeli troops from Gaza. The resolution was passed with 14 out of 15 members in support of the resolution. The US abstained from the vote.

This is such a great news, it really helps, Your blog is nice and informative. Thanks for the article.
Term papers

Blogs are so informative where we get lots of information on any topic. Nice job keep it up!!

it's good to see this information in your post, i was looking the same but there was not any proper resource, thanx now i have the link which i was looking for my research.